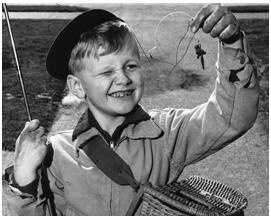 THE BIOGRAPHIES OF well-known leaders prove something you may have always believed: If you want to know why an adult is the way they are, look at their childhood.

That’s exactly what Mark Leibovitch did more than 10 years ago for a Washington Post profile of Steve Case, the reclusive, competitive genius who was then the head of America Online.

How did “You’ve Got Mail” — the greeting notifying AOL users that someone dropped them an e-mail — become a household phrase and the title of a popular movie?

It should come as no surprise that the man whose company was so strongly identified with its electronic mail feature preferred to communicate with his staff and others via e-mail. In fact, most of the “interviews” for Leibovitch’s article were e-mail exchanges.

Looking back at Case’s childhood, it’s also not surprising is that he reportedly spent hours alone up in his room as a child, typing letters or ordering things out of scientific catalogs.

He loved getting mail.

A look into the childhoods of leaders reveals patterns that contribute to defeat as well as success. Richard Nixon reportedly enjoyed saving mementos as a child from experiences both important and mundane. This childhood desire to preserve memories may well have led him to record his own conversations with others as President, one of the facets of his personality that led to his political self-destruction.

You may not be deciding which media company to buy, or whom to fire among your cabinet members. But it’s still important to review your own life history to understand your motives and behavior as a leader today.

This professional life review involves thinking back to the very first thing you ever did to earn money and traces the transitions you’ve experienced from that very first job up to the current one.

Were your first ventures bold or safe? Independent or partnerships? Inspired by a parent, or something you heard about in school?

Looking at the choices you made and the thinking that preceded those choices can reveal patterns that provide rich information about why you do the things you do.

And that awareness can make you a more savvy, effective leader.

As 2011 comes to a close, now is an excellent time to look back not just over the past 12 months, but also to see who you have been over the course of your lifetime.

It can say a lot about who you are yet to become.