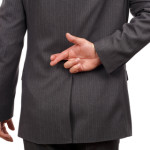 We’re fascinated by liars. Especially when they’re in leadership roles.

And why read novels when news headlines provide more comedy and tragedy than the fiction section of Amazon?

Is Patriots coach Bill Belichick a gridiron genius? Or a massive cheat? Those who hate him see the cheat, and those who love him can’t seem to get their head around him as a liar. And maybe he’s not.

Right here in Philadelphia, former sports anchor Don Tollefson was convicted yesterday of cheating donors and prospective recipients of a charity he (sort of) ran.  He reportedly blamed hundreds of thousands of misdirected funds on addiction problems and bad business skills. (More on that later.)

My fellow psychologists are obsessed with lying.  They study why we do it (yes, I said “we”),  how to detect it, how to not be detected doing it, who does it more, who doesn’t do it,  and many other variations on the theme.

And those studies provide insights into why we may act completely outraged at the lies of one person but totally forgiving of another, depending on how we FEEL about that person.

In a survey of employers, many said they would hire someone even after discovering misinformation (as in lies) on that person’s resume. As crazy as that sounds, hiring leaders may actually LIKE someone who shows a competitive spirit. Competitive enough to lie (a little) to get the job.

Another study suggested we tend to cut people slack for lying on something like a sliding scale, depending on how close they are to us.

Not such a great friend? Not so much slack for a lie.

Someone really close, like a spouse? We tend to cut them the MOST slack for telling a lie.

Perhaps that’s why spouses are often the last to suspect cheating by the other spouse: The cheater has earned so much credit with the other partner that it fogs the lenses that would see the truth if it were someone else being viewed.

This likely applies to leaders we love, as well.

In famous cases of corporate swindling, those closest to the swindler often say they had no idea or cannot believe that the person was deceptive.  And those who “feel” close to a leader through positive media stories, social media contact and more may feel that same closeness, and thus have that same blindness or willingness to forgive.

Related to that is the likelihood that “cognitive dissonance” is at play.

In plain terms, dissonance occurs when we are confronted with two conflicting ideas, beliefs or explanations in our own mind.  Dissonance is uncomfortable, so we mentally “balance” things out by coming up with an explanation for the behavior, which then resolves the dissonance.

Here’s an example: You’re in a hurry at the store and grab the first bar of soap you see for no particular reason. Later, someone asks you why you bought it. As meaning-making souls, we like to have reasons for our own behavior, so the idea that you acted with no reason at all creates dissonance.

You might resolve that dissonance (and restore psychic balance) by saying, “Oh, I bought it because it was on sale,” or, “I just saw a commercial that said it makes you smell like a fresh haircut” or some other reason that explains our own behavior.

When we like or love a liar, downplaying, discounting or ignoring the lie restores a sense of mental equilibrium.  Our behavior (forgiveness or downplaying the severity of what the other person did) is now in line with our positive feelings about the person we like or love.

In an example of this from the Tollefseon case, the foreman of the jury — which had just convicted Tollefson —  was reported to have said it was difficult for the jury to convict because Tollefson was a “nice guy.”

Liking him interfered with seeing him as a liar.  Not surprisingly, the jury took quite a while to come to a decision.

That frustrated many who didn’t like Tollefson because they couldn’t figure out why the jury didn’t immediately convict. But it makes sense if you consider it in light of cognitive dissonance.

The jury had a chance to see Tollefson, who served as his own attorney and addressed them frequently and apparently persuasively, in a way that resulted in LIKING him.

That made it much harder to see him as a liar who should be punished.

So, the next time you see a news item or hear — in your own world — about someone in a leadership position who seemed to lie, cheat or steal to win, take the role of a passive, curious observer.

Then observe how they convict or forgive in accord with those feelings and beliefs.